Chilean sailor makes history after announcing he is gay 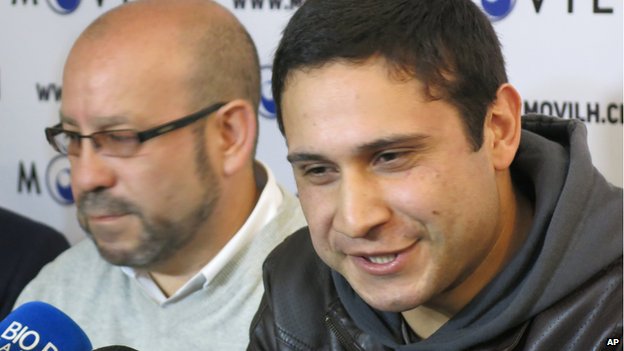 A sailor in Chile has become the first serving member of the Chilean armed forces to announce he is gay.

Mauricio Ruiz, 24, told a televised news conference his decision had “not been easy”, but he wanted to help fight discrimination against homosexuals.

Mr Ruiz said that what was most important was not a soldier’s sexual orientation, but his or her willingness to serve the country.

His announcement came with the full backing of the Chilean armed forces.

Like other parts of Latin America, Chile remains a conservative society, especially towards gay marriage.

Chilean President Michelle Bachelet has come out in favour of the idea, but the majority of Chileans oppose it.

‘Be yourself’Mauricio Ruiz said homosexuals had “no reason to hide”.

“We can do anything, be marines or in any branch (of the military). We can do whatever profession, and we deserve as much respect as anyone else,” he told reporters in the Chilean capital, Santiago.

“In life there’s nothing better than to be yourself, to be authentic, to look at people in the eye and for those people to know who you are.”

Rolando Jimenez, president of Chile’s Movement for Integration and Homosexual Liberation, expressed his gratitude to the Chilean Navy.

“(The Navy is) telling the country and the members of the institution particularly that it is possible for gays and lesbians to be part of the armed forces and that they aren’t going to suffer discrimination because of their sexual orientation within these institutions,” Mr Jimenez said. 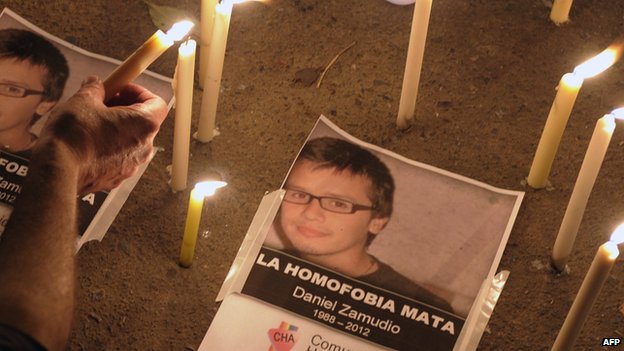 Attitudes towards homosexuality are changing in Chile, especially after the 2012 murder of a gay young man, Daniel Zamudio

Correspondents say attitudes are changing in Chile, especially after the brutal assault and killing of a young gay man in March 2012, which sparked outrage and triggered a fresh debate over hate crimes.

Four men were jailed in October 2013 for the murder of 25-year-old Daniel Zamudio in Santiago.

And in May 2012 the Chilean Congress approved a new law which made it a crime to discriminate on the basis of race, ethnicity, religion, sexual orientation, gender, appearance or disability.

The gay rights movement has achieved major victories in some other South American nations, like Argentina and Brazil, but homosexuals remain targets of violence and harassment across the continent.

Just over a year ago, the Supreme Court ruled in favor of Edie Windsor in a case brought by the ACLU, striking down the core of the so-called Defense of Marriage Act. Since then, at least 35 courts across the nation have ruled unanimously in favor of marriage equality, including local, state, federal and district courts in Colorado.

There is no longer any doubt that Colorado’s marriage ban is unconstitutional. A substantial majority of Coloradans now support the freedom to marry for same-sex couples, and it is shameful that marriage equality has yet to be fully realized in this state.

The only remaining obstacle to marriage equality in Colorado is Attorney General John Suthers, who has insisted on calling for stays and appealing all Colorado court decisions. In local media, he has claimed that he has no choice but to defend the ban, as if doing so reluctantly out of civic duty, even though leaders in both major political parties, including Republicans in New Jersey, Pennsylvania, and Nevada, have stopped defending bans in their states.

Now it is clear that Attorney General Suthers is on a personal crusade against the freedom to marry, not only willing to waste Colorado tax dollars defending the Colorado marriage ban, but also wasting our tax dollars in other states. Suthers has spent his time and our tax money organizing nine other states to file a “friend of the court” brief defending the marriage ban in Indiana. Colorado is not affected by the 7th Circuit Court of Appeals, where Indiana is located, yet Suthers has chosen that case to weigh in with truly shocking hypocrisy.

In Colorado, Suthers has asked the courts to delay implementation of their decisions because he claims that the matter needs to be ultimately decided by the US Supreme Court. In Indiana, Suthers makes a “states’ rights” argument instead, saying it is not the role of the judicial branch to decide, as if he thinks the Supreme Court should leave it alone.

Suthers makes the insulting argument in the Indiana brief that all the judges who have ruled in favor of marriage equality have misunderstood the Windsor decision. He claims that only he and his staff truly understand it. That argument was emphatically rejected by Colorado District Judge C. Scott Crabtree earlier this month.

In his Indiana brief, Suthers attempts to equate same-sex marriage to polygamy or to marriage between adults and young children. He trots out the argument that the core purpose of marriage is reproduction. This ugly, dated argument excludes the marriages of couples who struggle with fertility issues and choose to adopt, couples who decide not to have children for a variety of reasons or couples who marry after menopause. It is also an argument that has repeatedly been rejected by the courts, including in Judge Crabtree’s ruling in Colorado.

Clearly, even though he knows his attempts are futile, Attorney General Suthers will stop at nothing to flout the U.S. Constitution, delay justice for countless loving, committed couples, insult judges across the United States, and put his biased and poorly-reasoned views on national display. He also apparently doesn’t care how much Colorado taxpayer money he wastes in the process. Is this what a Colorado Attorney General is elected to do?

Attorney General Suthers would do better to keep his focus on Colorado and to stop standing in the way of unanimous decisions by the courts, the clear preference of Coloradans in every current poll, county clerks who are eager to follow the Constitution, and all the couples who are in legal limbo or who have been kept waiting for years. The backwards ideas of one person should not hold up the freedom to marry for an entire state.

The much-loved poet Dr. Maya Angelou once wrote, “Love recognizes no barriers. It jumps hurdles, leaps fences, penetrates walls to arrive at its destination full of hope.” It is that unrelenting power of love that unfolded during our fight for marriage equality in Illinois.

In the end, we succeeded in ensuring this civil right for all couples and put Illinois on the right side of history. Starting now, everyone in Illinois may receive the long-overdue rights of marriage. Advocates had to jump hurdles, leap fences and penetrate walls to make it happen, but we arrived at our destination. Last November 20th, I signed the Illinois Religious Freedom and Marriage Fairness Act into law.

In 2011, when I signed Illinois’ civil union legislation, few could predict that in a few short years, marriage equality would be the law of the land. Sometimes a struggle can take decades, but change can happen overnight. Now, through the tireless efforts of advocates who have stood up and spoken out for equality across Illinois and the nation, we made history and enacted a reform that will last forever.

Since taking office, I’ve worked to make Illinois a more welcoming state. After declaring marriage equality a priority in my 2013 State of the State Address, I worked with legislators and dedicated activists. It was a difficult battle, but eventually lawmakers passed Senate Bill 10, making Illinois the 16th state to embrace full marriage equality. The bill signing last November – before thousands of joyous people at the University of Illinois at Chicago – was among the proudest moments of my governorship.

The new law is simple and fair. It requires that Illinois laws pertaining to civil marriage must apply equally to all, and guarantees equal access to benefits, protections, rights and responsibilities for all couples entering into marriage and their families. These protections include provisions under the Affordable Care Act that require insurance companies to offer the same coverage for all spouses, regardless of gender. Families will be able to enroll in a plan together through a special 60-day enrollment period.

One person who made this day possible was Vernita Gray. A tenacious activist, Vernita was loved in the community and respected by politicians. She and her partner made history when a judge ruled that, due to Vernita’s declining health, they could marry late last year – ahead of today’s effective date. Vernita passed away in March with her new wife Pat by her side.

So today, I’ll think of Vernita Gray and others unable to witness this day. I’ll think of happy couples embarking on the adventure of marriage. And I will be proud to live in a state where the will of the people can become the law of the land.